It's been a little bit since my last post, but I had a paper due for the end of the semester; now that's done and done! I thought I'd do a little product review of one of Clover Japan's newest craft items... a heart shaped pom pom maker (click on the link above to go to the clover website where there is a video of a heart pom pom being made)! Clover's regular round pom pom makers are genius, so I thought I'd give their cutie heart ones a go. 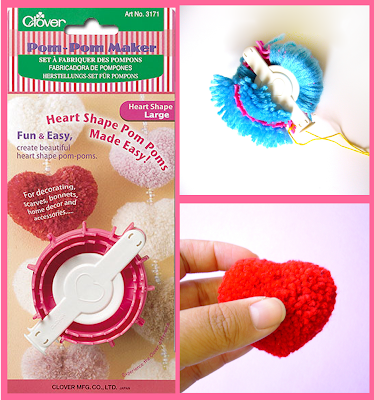 I would definitely recommend using/ getting the heart pom pom maker... I think it would be pretty hard to make a heart pom pom without it! Although I initially bought the "large" size (2.5" - 3" or ~63mm-76mm), I have since bought the small size too. The heart pom pom maker works in basically the same way as the round pom pom makers, except there are markers where you should wind the yarn; this is to build the shape of your heart. There are a few key things you should remember when using this pom pom maker: Compared to the round pom maker, cutting the yarn once you've wound it is a bit harder on the heart pom pom maker. I always overload my pom makers with yarn... I hate the sparse look! And although the instructions say you can use yarn to tie your pom together, I've found that it's way too bulky... you really need to tie the heart pom VERY tightly; I would recommend a thick string or even wire of some sort, as long as you can get it really tight (not embroidery thread... I actually ripped my embroidery thread in half and my pom exploded). 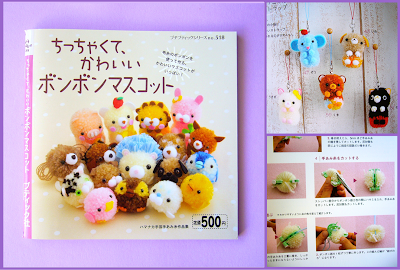 I also thought I'd share a cute pom pom book I got a while back. If you're looking to get this book (or a book on pom poms, for that matter) I would definitely recommend this book; while it's entirely in Japanese, the pictures and ideas are really kawaii. From animal keychains to Christmas themed poms, this book provides a really good range of projects.
Posted by Holly at 11:04 PM